The trees and bushes that provide a sampling of fruits and berries in our Orchard are an extension of our Trial Garden.  This area 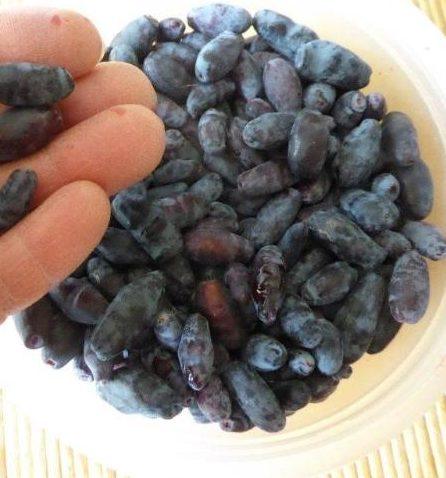 is accessible by volunteers only except during guided tours and on Garden Day in the Park in July when we welcome visitors to explore and learn more about the Park.

Several rows of raspberries consisting of 13 different varieties were planted in the early days of the Park followed shortly after with rhubarb, saskatoon and currants.  Currently the Orchard has sour cherries, apple trees, an apricot and several plums. We are trialing an edible Mountain Ash discovered by Dr. Ieuan Evans as well as the John Beedle Pear named after our very own John Beedle.

Most people consider any Canadian regions other than B.C. or Ontario to be not suitable for growing any type of fruit.  This is not true as there are an amazing number of varieties of both bush and tree fruits available to today's gardener.  Fruits such as Haskap (Honeyberries - photo on the right) were not even heard of when the Park began and now they are a must have in every garden.