These magnificent flowers we enjoy today can be traced back to the native Dahlias still growing in the mountains of Mexico and Guatemala. The history of many plants can be traced through primitive records containing facts as well as mythical legend. In the case of the Dahlia, it is known that there was extensive material but it was assumed to be unscholarly and was destroyed by those who brought Christianity to the people of Central America. Some information was recorded and kept by the Spanish conquistadors who conquered the Aztecs in the 16th Century. They conducted explorations of plant life and were especially enthralled by the species Dahlia imperialis (photo on the right).  It is a huge plant growing from 12’ - 20’ high with hundreds of open-centered single blooms on large hanging stems.  Because of its imposing size, this species is known as the ‘tree dahlia’. The hollow stems are 4” thick and were used as vessels to hold water ... natives referred to the plant as ‘water cane’. They also used Dahlias as a herbal treatment for epilepsy.

It was not until the 18th Century that Dahlia seeds, roots and plants made their way to Europe by way of the Royal Botanical Gardens in Madrid. At first the Dahlia was looked at as a possible source of food because a disease in the early 1840’s had destroyed the French potato crop. After tasting the Dahlia tubers, they quickly gave up on that idea although substance obtained from tubers has been very useful medically in the treatment of diabetes and liver and kidney disease. Many botanists were taken with these plants from the new world and hybridizing and creation of new cultivars was well under way by the end of the 18th Century.

Dahlias are a composite flower and come in all colors except true blue. Within this color range you will find a wide combination of bicolors and variegation. There is also extreme variation in forms of the Dahlia from the most familiar Decorative and Cactus styles to Novelty types with unique characteristics.  Blossom size ranges from a petite 1” to the eye-catching 12” blooms known as ‘dinner plates’.  Over 200 years of interest in Dahlia hybridizing has resulted in over 20,000 varieties with more becoming available each year.

Dahlias are recognized chiefly by their form which is the nature of their flower shape (and sometimes size). In 2010, after much discussion on botanical characteristics, the International Dahlia Register deemed there to be 14 Classification Groups relating to Form.

SINGLE FLOWERED (1) Single Dahlias have blooms with a single outer ring of florets (petals), which may overlap; the center forms a disc which is visible.   Examples - Happy Single Date (left), Mystic Illusion (right)

COLLARETTE (3) Collarette Dahlias have blooms with a single outer ring of generally flat ray florets, which must overlap.  There is a ring of small florets (the collar) that surrounds a center disc which is completely visible.    Examples - Pooh (left), Mary Evelyn (right)

WATERLILY (4) Waterlily Dahlias have fully double blooms characterized by broad ray florets that are slightly involute along their length (longitudinal axis) giving a saucer shaped appearance to the bloom. The depth should be no more than 1/3 the diameter of the bloom.   Examples - Kilburn Rose (left), Serkan (right) 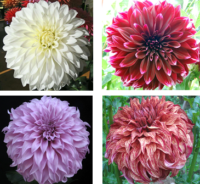 DECORATIVE (5) Decorative Dahlias have fully double blooms and show no center disc. The ray florets are generally broad and flat and may be involute for no more than 75% of their length (longitudinal axis) or slightly twisted, and usually bluntly pointed.  When exhibiting this group of Dahlias, they are further divided by size into either Giant, Large, Medium, Small and Miniature.  This form of Dahlia was very common to see in many early gardens, in particular, shorter varieties which were referred to as ‘bedding’ Dahlias.  Examples of Formal Decorative - Lulu Island Art (top row, left), Contraste (top row, right)    Examples of Informal Decorative - Vasio Meggos (bottom row, left), Harvey Koop (bottom row, right)

BALL (6) Ball Dahlias have fully double blooms, ball shaped or slightly flattened. The ray florets are rounded at the tips, with margins spirally arranged and involute for at least 75% of the length of the florets. Group is sub-divided into two sizes - Small and Miniature.   Examples - Ferncliff Spice (left), Camano Mordor (right)

CACTUS (8) Cactus Dahlias have fully double blooms, the ray florets are usually pointed, the majority narrow and revolute for 65% or more of their length (longitudinal axis) and either straight or incurved.  As in the Decorative Group, there are five sizes of Cactus Dahlias.  Examples - Weston Spanish Dancer (left), Mingus Gregory (right)

SEMI-CACTUS (9) Semi-Cactus Dahlias have fully double blooms; the ray florets are usually pointed and revolute for more than 25% and less than 65% of their length and broad at the base and either straight or incurved.    There are five sizes, as in the Decorative and Cactus Groups.  Examples - Leila Savanna Rose (left), Preference (right) 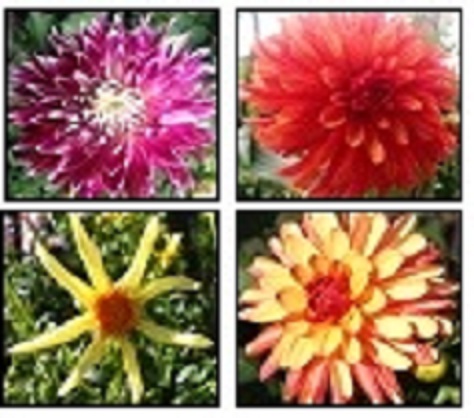 FIMBRIATED (11) Fimbriated Dahlias have blooms where the tips of the ray florets are evenly split / notched into two or more divisions, uniformly throughout the bloom to create an overall fringed effect.  Petals may be flat, involute, revolute, straight, incurved or twisted.  Examples - Myrtle's Folly (left), Ice Crystal (right)

PEONY FLOWERED (14) Peony Dahlias have multiple outer rings of ray florets surrounding a disc, ray florets are flat or slightly involute at base and are flat or are to some extent revolute.  Examples - Powder Gull (left), Longwood Dainty (right)

The way a Dahlia ray floret, or petal, curls along its length is fundamental to the way Dahlias are classified.  Two terms are used to describe this petal curl.

Revolute - petals curl outwards down their length away from the center of the flower; they curl down, towards the stem of the plant or towards the ground.

Incurved - bent or curved inwards or forwards toward the front of the flower.

Recurved - curved downward or backward toward the flower stem.